By Eric May 14, 2020
A Falmouth man was arrested for allegedly placing razor blades coated in peanut butter on trees at a local park, police said.

According to environmental authorities, the razors were strategically placed to on the trees to attract wildlife.

Officers received a tip and launched an investigation in the area of Goodwill Park in Falmouth. 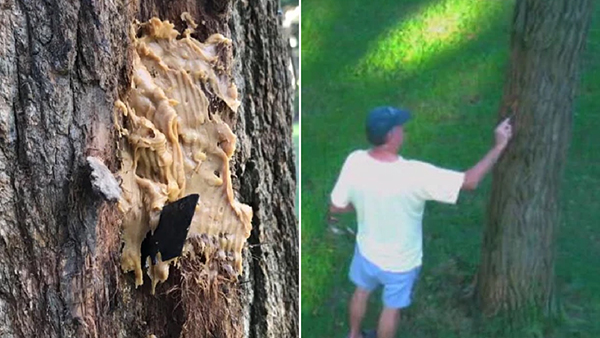 During their investigation, officers found evidence someone had been placing razor blades with peanut butter on the trees in the park.

One officer, while surveilling the park, caught a man placing the bait and then watching as animals were lured to the peanut-butter covered bait.

Authorities have evidence of squirrels coming in contact with the razor while feeding.

As kids playing in the park got close to the razor blades, officers removed them from the trees. A subsequent search of the park has not turned up any more baiting stations.

Brian McGrath, 43, of Happy Hollow Road in East Falmouth was arrested on Saturday and is being charged with animal cruelty, reckless behavior creating a risk of serious bodily injury and injuries to trees.

Tweets From Mom And Dad Which Are Actually Freakin’ Hilarious

By Eric May 12, 2020
Who said that parents aren’t funny? We’ve all heard of tragic “dad jokes” and Mom’s embarrassing the life out of their kids, but sometimes we can be genuinely freakin’ HILARIOUS, okay?! It’s good sometimes to have a giggle at the expense of our kids- it’s healthy and therapeutic- and this is exactly what these parents have been doing recently on Twitter.

We wish we could think of comebacks half as incredible as these. Moms, Dads, take a bow…