Sometimes, it’s because your kid has a meltdown, sometimes it’s because they’ve screamed their new favorite curse word, and sometimes it involves poop. Regardless, it’s hard for a parent to know how to react, but an unknown dad at a Minnesota Target has given us an example of the right way to do it. 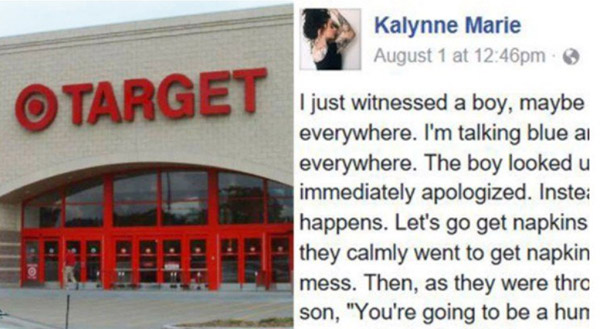 Social media user Kalynne Marie was sitting at the Starbucks in her local Target when she witnessed a little boy, who she guessed was about 6 or 7, spill an enormous Slushee “I’m talking blue and red goop all over the floor, the table, everywhere,” she wrote in her post. Normally, this isn’t the kind of thing that strangers write Social media posts about, but it was the way the boy’s father reacted to the spill that got Marie’s attention and made her post go viral.

View this post on Instagram
I'm at Target & ran into the father and son from my Facebook post that went viral! So OF COURSE I had to say hi! Everyone meet Joe!
A post shared by Kalynne Marie Bowie (@kalynnemarie_) on Aug 8, 2017 at 12:36pm PDT

According to Marie, the boy immediately apologized to his father, who calmly told him the following: “Hey, it happens. Let’s go get napkins and I can show you how to clean it up.” No freaking out, no fury, no blame, just, “Hey, it happens.” We all know that this father could have responded very differently, but instead of letting any public embarrassment get him angry, this dad was cool as a cucumber. He let his son know that accidents happen, and it was nothing to get upset about. After they were done cleaning up the spill, he told his son, “You’re going to be a human being for a long time, and you have such a smart brain.

That it’s important you learn how to be more aware of what you’re doing. So next time just be sure to pay more attention to your surroundings so accidents like this don’t happen. Accidents like these can be prevented, but it’s still okay if they happen. As long as you take responsibility for your mistakes, the clean up is a breeze.” See what he did there? He told his son he was smart, that spilling a drink doesn’t make him bad or stupid, that accidents are going to happen because he’s a human being, and that the important part was taking responsibility for his mess. Wow. We are in awe of this man’s words, partly because in the heat of the moment it’s nearly impossible to be this eloquent. Most of us would have responded with a jumble of words that included “it’s okay,” “don’t worry,” and “napkins.”

Marie, who is the single mom of a two-year-old, told Babble that she was so impressed by his reaction that she started taking notes: “As soon as the father started helping his son clean up, I opened the Notes app on my phone and wrote what he said word for word, because I was so inspired by how he was handling the situation.” And we are so glad she did.

Because when you see, as Marie calls it in her post, “parenting done right,” it’s important to take notes for the rest of us. It takes a village to learn how to turn a spilled Slushee into a life lesson.

Later, Marie edited her post to add something else the man said to his son: “I know big messes seem overwhelming and you might feel like you can’t do it by yourself, but it’s always okay to ask for help. There is no problem with asking for help when you need it.” Three cheers to this amazing father. And what a lucky boy his son is to have a dad who won’t use his mistakes against him, but instead helps him walk away from them with a sense of responsibility, competence, and the feeling that he can handle any other spilled Slushess that come his way.

This Article Was First Published on scarymommy.com