Badass Crab Wields Knife To Protect Itself From The Chef – Video

By Eric May 13, 2020
It was the usual hustle bustle at the hotel kitchen as everyone was busy with his share of duties and everyone was too over loaded with work as it was the weekend time and over and above that it was the dinner time at this popular eatery restaurant in the town.

The helpers were busy doing the dishes at the huge sink in the corner of the kitchen, the chefs were busy preparing their specialties and as this was a multi cuisine restaurant the owner had to employ a number of chefs for the variety of cuisines that were on the menu card of the place. 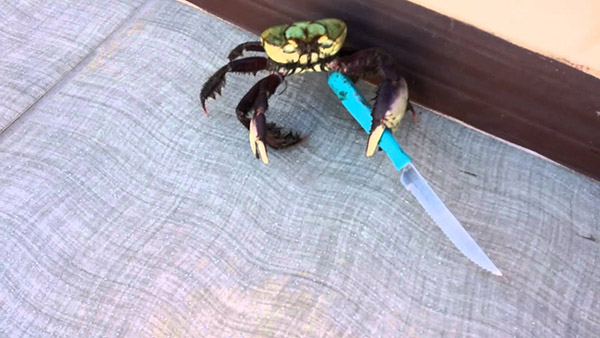 They served the Chinese, the Italian, the European, the Middle East, the Japanese, the Mexican, the Mughlai, the Korean, and a host of other cuisines in the hotel.

The waiters were busy decorating the paper napkins on the tables, the house keeping staff was busy in giving the last final touches to the cleanliness of the place. In a corner of the kitchen the Chinese chef was busy with his preparation of his specialty and was engrossed in his routine the usual way as he did this for years at the hotel.

He had been doing the same stuff for years and his hands moved as though they were programmed to do the schedule that he was performing. He noticed some movement under the cooking table where he was working. Out of curiosity he lifted the table cloth to see what noise was coming and what was the movement that distracted him from his duty. To his utter surprise he saw a crab on the floor.