By Eric May 13, 2020
A officer pursuit that featured an acrobatic roof-to-roof jump and a driver traveling on the wrong side of the street went though East Los Angeles and Downey before ending in Bell Gardens area Wednesday.

Newschopper4 Bravo with Gil Leyvas was over the chase around 5 p.m., as the driver in the car was driving on the wrong side of the road and narrowly avoiding crashes. It was not immediately clear why the pursuit was initiated. 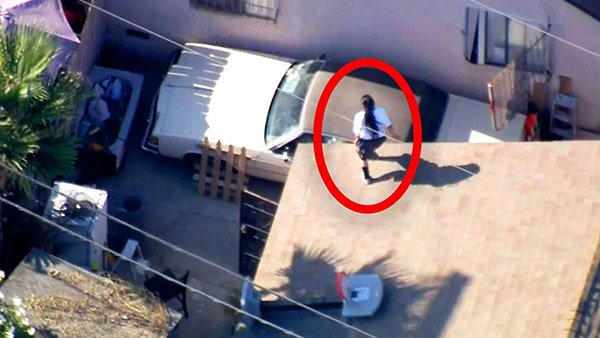 The pursuit vehicle was weaving in and out of traffic, ignoring stop lights and driving in on the wrong side of the street.

Around 5:05 p.m., the vehicle moved into the Downey area. Two people exited the vehicle around 5:10 p.m. in the Bell Gardens area, and the driver ended up acrobatically climbing onto a roof, before jumping from roof to roof and balancing on a wall.